In Michigan….this is one of the great rivalries.  And Frank and his bride are no exception.  These two are 3 inch pegs and with the bride’s hair they stand about 5 inches tall.  They can be made to order in any school of your choice….for example Army/Navy, Alabama/Auburn, Oregon/Oregon State, Michigan/Ohio State or maybe they went to the same schools and just want to show off their colors.  To order go to our Etsy shop.  As they are original hand painted art, there will be slight variations.  Please allow two weeks. 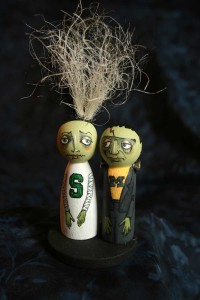 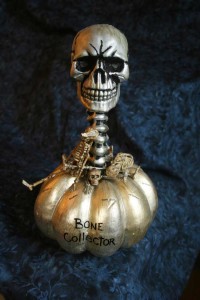 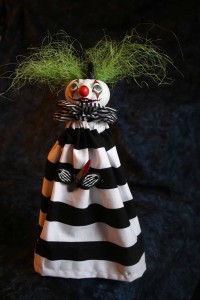 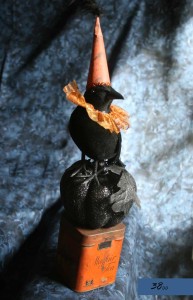 Just in Time for Halloween we give you these slightly less than sweet pieces.

Unfortunately we will be unable to participate in Northville’s Fall Fair.  some unforeseen circumstances have caused a change of plans. We do have some new art which we will be posting on Etsy and on Facebook within the next couple of days.  Here is a preview. 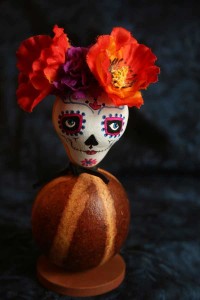 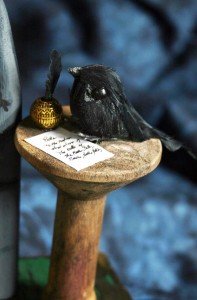 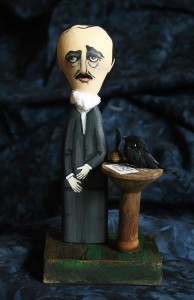 Edgar Allan Poe was an American author and poet best known for his stories of mystery and the macabre.  He was born in 1809 and orphaned at an early age.  In 1825, 26 year old Poe married his 13 year old cousin…..bizarre by today’s standards but not unusual for the time.  His poem “The Raven” was published in 1835 to instant success but more sadness came his way with the death of his wife to Tuberculosis just two years later.  Poe himself died at the age of 40 from unknown causes.  He was a master of the short story and his work is still celebrated today.  Here he is then…..Edgar.

Edgar’s body is part of a chair back.  His base is from an old screen and the table is an antique spool.  On the table there is a fancy little inkwell complete with a feather quill pen.  The paper contains a rough draft for his poem “The Bells”.